I was born in Brooklyn and my parents moved to Long Island when I was three.  I lived there until I was 35 and relocated here to the DC area.  When I go 'home' I go to New York.  It's where my mom and dad are.  It's where the other half of 20 year friendships live.  It's a significant and fabulous part of my story.

On Tuesday September 11, 2001 I lived on Long Island, NY in a nice little town near the south shore called Wantagh. It's about 30 miles east of Manhattan.  I was married to my first husband, we had two dogs and I worked at an employment firm where I routinely arrived for work around 10:30am.  At 8:00am I climbed on the treadmill and watched the second half of Pretty Woman (for the millionth time) to keep my mind occupied.  It was just before 9:00am when Julia Robert's rescued Richard Gere "right back."  I still had another 20 minutes of treadmill time ahead of me so I shut off the VCR (yep, was still using one of those then) and turned on the news.   The first thing I saw was a shot of the north tower on fire.  As I was trying to process exactly what was going on I noticed a plane approaching the towers.  I said to myself "This must be a water tanker coming to douse the flames."  Aviation expert I am not.  As soon as I saw it hit the south tower the words 'terrorist attack' flashed in my head like a neon sign. 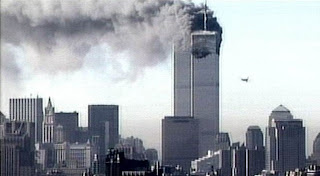 I have this uncanny ability to emotionally detach from situations by controlling my thoughts.  And if I have to lie to myself as well, so be it.  So as I watched the two buildings burn I kept thinking "Everything will be ok."  "Everyone will get out."  "They will put out these fires and everything will be ok." 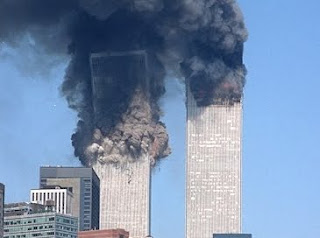 For the next hour I continued walking on the treadmill while my eyes were glued to the television. I prayed for everyone's safety and I was still convincing myself that everything would be ok.  With all the resources we have at our disposal in this great country - everything just had to be ok.  I don't remember much about this hour.  Nine years later it seems like I was suspended, floating in time.  The south tower collapsed at 9:59am.  I held on to hope for the survivors and our remaining tower.  "The north tower will hold, the people will get out, the south tower will be rebuilt and everything will be ok." 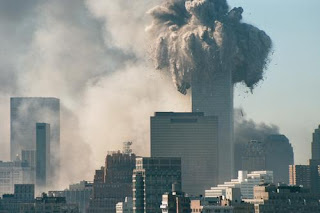 With the collapse of the north tower at 10:28 reality came rushing in and there was nothing I could do to stop it.  I will never forget the feeling...of my heart being ripped out of my chest and thrown on the floor, shattered.  I screamed.  I collapsed.  I sobbed uncontrollably.  It was a feeling of grief that I mercifully had never felt before and have not felt since.  During this time my friend Dawn called and all I can remember screaming into the phone was "They took our towers, they took our towers." 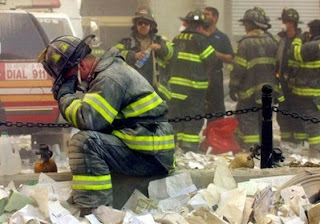 Everyone copes with stress differently and my coping mechanism was to go to work.  I got myself together, showered, dressed quickly and headed off to work.  I was in a complete daze as the radio reports droned on and on about the etrocities.  The newsmen spoke of the crash in Pennsylvania, the Pentagon and there were even reports of acts of terror at Camp David and in Washington DC (which later turned out to be false).  Mass evacuations were taking place in NY and DC.  It felt like Armageddon.  I was only a block away from my office when I felt an overwhelming need to go home and be with my husband.  I called him and he said he was leaving his job and would meet me at home.  I called my company and spoke with my co-worker Tom.  I told him I was only a block away but I wouldn't be coming in, I had to go home.  He was confused and asked me why and I said "Do you have any idea what is happening right now?"   As I sat at a traffic light and looked around at the other drivers I had a surreal moment.  "Doesn't everyone know the enormity of what is happening?"  I felt like I was the only person in that scene who understood the true scale and impact of the disasters that were unfolding.  I knew in that moment that September 11th was going to change many lives and our country forever.  This was the Pearl Harbor of our time. 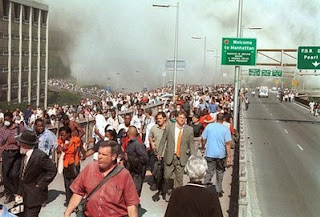 I got home and embraced my husband and we both cried.  We turned on the television and started calling around to our various friends who either worked in New York City or whose spouses did.  Has anyone heard from Rob? Russell? Ed? Pete? Phil?...and the list went on.  Friends on Long Island started to feel the need to be together as we waited for word on everyone.  We gathered at Rob & Stacy's where we watched television, talked, ate and drank wine to calm our nerves.  Slowly people started to call in.  All transporation in Manhattan was at a standstill and everyone was walking across the Brooklyn Bridge.  It would be a long time before anyone would get home.

Ten hours after the first plane hit Rob, Russell and Ed walked through the door.  It had been a grueling day.  They were tired and hungry.  As we fed them they sat down to watch the television newscasts of the day for the very first time.  It was mind boggling and overwhelming.

As the days went by we started to hear more of the days accounts from friends and friends of friends.  If you lived on Long Island you personally knew someone who was in NYC that day if you weren't there yourself.  God shined his light on our friend Phil that day.  His baby daughter had kept him awake most of the night so he was late for work.  He came out of the subway in between the first and second planes hitting - and he made a quick decision to grab a cab and take it straight home.  Everyone that was in his office that day perished.  Pete wasn't so lucky.  Pete worked for Cantor Fitzgerald and he was in the office when the plane hit.  We prayed and hoped for days but we'd never see his smiling face again.  Pete Siracuse left behind a young wife and baby son.

I felt it was important for me to write this account of 9/11 today, 9 years later.  Although I seem to remember it like yesterday I am unsure of minor details and can't remember exact conversations like I used to - and I never, ever want to forget.

Posted by Debra@ShopLaMuse.com at 5:09 PM

I not only encourage your stories, feedback and comments - I am grateful for them. Please share!